skip to main | skip to sidebar

This is my last TAC/EC post. Here are my arrangement and demo piece. For the other members' arrangements, you may check the complete file edited by Chih Huang: "Sogetsu BuxMont Study Group". It's well done and gorgeous! Thank you, Chih! 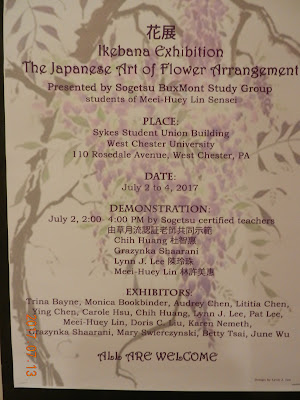 Once upon a time, my husband and I would take our three children--two teenagers and a toddler--to a college campus over July 4th weekend to attend the annual Taiwanese American Conference East Coast (TAC/ EC).
This year was the 48th year anniversary, and it's changed so much. Three decades ago, it was mainly first generation Taiwanese Americans who brought their children to attend. Since then, participation decreased, and for many years we didn't attend, particularly when our kids were busy starting their careers and families. But recently, more people have been returning because the second generation is grown now and they are bringing their kids! Grandparents, who were the originals, their children, and their children's children are now involved. The program has been handed to the second generation to organize (through TANG: Taiwanese American Next Generation), and we the older generation are supporting and helping. The theme of this year was "Generations United, Taiwanese Americans Together." When we were the parents, we brought our young kids to this occasion to learn about our root, culture and identity and also to have a great time. Now, we watch our own kids doing the same for theirs. How lovely to see our heritage passing down to next generation as we hope!.

The conference ran from 7/2 to 7/4/2017. Our Sogetsu BuxMont study group was asked to provide an Ikebana Exhibition. It was one of the many event's programs, others were cultural, political...etc. There were many speakers, young and old, from homeland Taiwan and US.
Here was the Classical Music Concert Night. The stage's big arrangement was designed and arranged  by Chih and me. 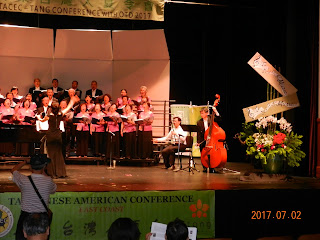 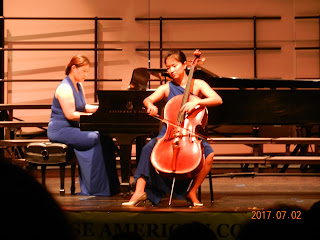 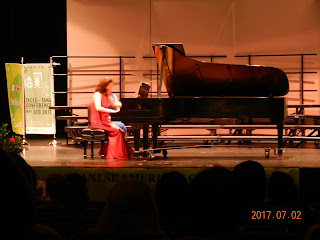 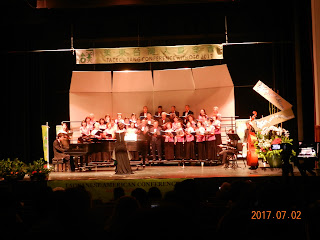 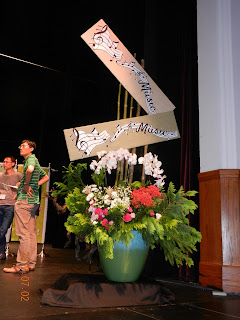 When our Sogetsu Ikebana study group was asked to provide a program about Ikebana in the 2017 Taiwanese American Conference/ East Coast (TAC/EC), it was short notice.  We had to prepare the whole thing, such as the stage decoration, poster, member's demonstration and exhibition. June was a busy month for preparation. We had 16 study group members participate in the exhibition and 4 members to do the Ikebana demonstration. My job was to design a poster, help decorate the stage for the music concert, providing one arrangement and a demonstration. All of these had to be done and ready for July 1.

1) Here is my first try for the exhibition piece, using a tall ceramic container and dried vine and leaves. The seasonal materials are mock orange flower and magnolia leaves. I fully understand the flower might not be available by then. So, I plan to change other flowers when the time comes.
2) For my demonstration, I am thinking about using my two bamboo containers combined and arranged as one arrangement., but it will be using different flowers.  For now, I am using Hydrangea, knowing that it will be changed. 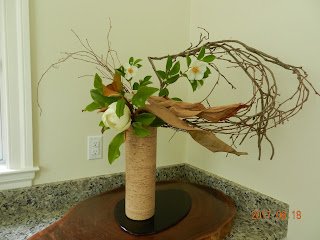 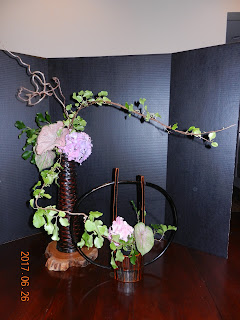 We have moved into our new home for more than six months now. During the long moving process, we gradually transplanted our beloved perennial plants to our new home's temporary garden place, adding to the existing flowers here. This Spring and Summer all the plants survived and are flowering. I am delighted! 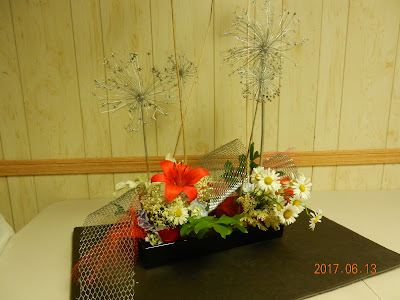